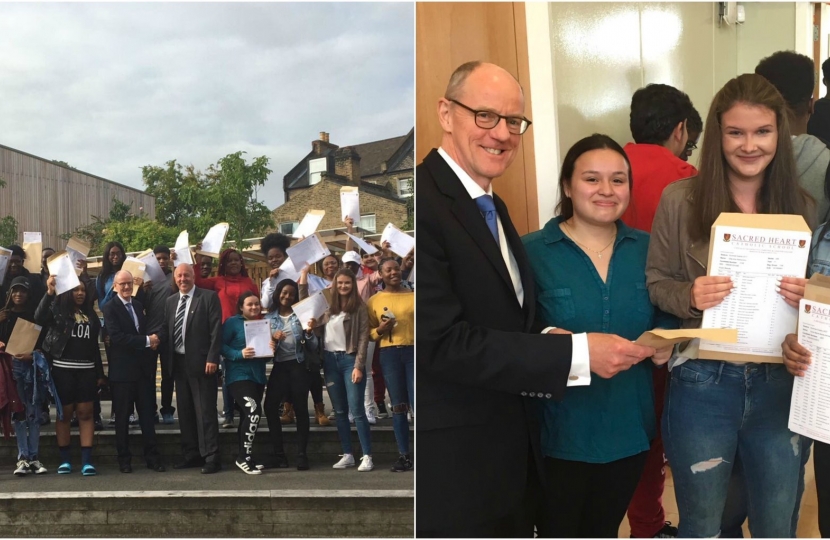 Today is GCSE results day when 600,000 16-year-olds find out the results of two years or more of hard work and study. It is an important day for pupils, who will now move onto the next phase of their education well equipped for what lies ahead, and for their teachers whose dedication and hard work has helped them progress.

Commentators will no doubt use the occasion to reflect on the Government’s education reform programme, because three of the GCSEs - English language, English literature and maths - are new and are the product of our reforms. The maths GCSE is now more demanding, making the transition to maths A-level less daunting. The new English GCSEs encourage students to read a greater range of literature and there’s more emphasis on spelling, punctuation and correct grammar.

Our school reforms in England – responsibility for education in Scotland, Wales and Northern Ireland lies with their devolved governments – have been designed to tackle shortcomings in our education system about which employers, colleges and universities have long complained. They have been introduced in order to halt our relative stagnation compared to the world’s best education systems, such as in Singapore, South Korea and the city of Shanghai. Our changes have also sought to restore confidence in our public examinations.

But these changes should not be seen in isolation – they are the culmination of a comprehensive and long-term approach to raise standards and ensure pupils’ success is down to their hard work and not their background. We've improved behaviour in schools by giving teachers more powers to deal with unruly pupils.

We’ve ensured that young children starting school are taught to read more effectively, using the long-established method of phonics. This has resulted in a dramatic improvement in how well 6-year-olds can read. In 2012 just 58 per cent passed our new Phonics Check, a test of basic reading. Last year 81 per cent of 6-year-olds passed and our ambition is to see that rise further still. No child should leave primary school still struggling to read fluently. Reading is the foundation stone of a successful and fulfilling life.

We’ve raised academic standards and expectations in primary schools with a new curriculum which came into force in 2014. Children are now expected to read more widely and to write and spell with greater accuracy.

Grammar is now being taught from an early age and greater focus has been placed on the teaching of arithmetic with primary school children expected to know their times-tables by the end of year 4.

In secondary schools we have ended the practice of some pupils being entered for less demanding qualifications that were billed as being equivalent to GCSEs but in reality failed to prepare them for further education or training.

We have put greater emphasis on the core academic subjects – English, maths, science, history, geography and languages – which the Russell Group of leading universities say when studied at A level, will keep the widest range of degree courses open to them at those universities. As a global trading nation we cannot rely on the ubiquity of English as an excuse for refusing to speak to our customers in their own language.

We also recognise the importance of developing technical skills and the new T-levels will soon provide a high-calibre technical education for pupils who choose not to move onto A-levels after taking their GCSEs.

We’ve raised entry levels into the teaching profession and have increased the professional autonomy of schools through the academies and free school programmes, taking control of schools away from under-performing local authorities and handing it over to head teachers.

Combined with greater scrutiny and stronger accountability this has resulted in more pupils attending schools rated by Ofsted, the schools inspectorate, as good or outstanding. In fact 1.8 million more pupils are today in such schools compared to 2010.

There is still more to do to ensure that in every part of the country and in those schools that are still not good enough, we continue to drive up standards. The next two years will see new GCSEs being introduced in all the other subjects, significantly raising academic standards in foreign languages, the humanities, the arts and science.

The grading system is changing to distinguish between the new and the old GCSE. Instead of grades ranging from A* to G, the new system will award grades from 1 to 9, with 9 as the top grade reserved for pupils demonstrating exceptional performance.

Education reform is always controversial, particularly when pursued with urgency to reverse a long term stagnation in academic standards, but schools have responded to the challenge of the new curriculum.

As we saw with last week’s new A-levels, we are beginning to see the fruits of our reforms translating into higher standards, improving opportunities and the life chances of millions of young people and helping to fulfil the voracious demand for knowledgeable and skilled young people from Britain’s dynamic and growing economy.

This article appeared on telegraph.co.uk on 24 August 2017.  To see the original article click here.