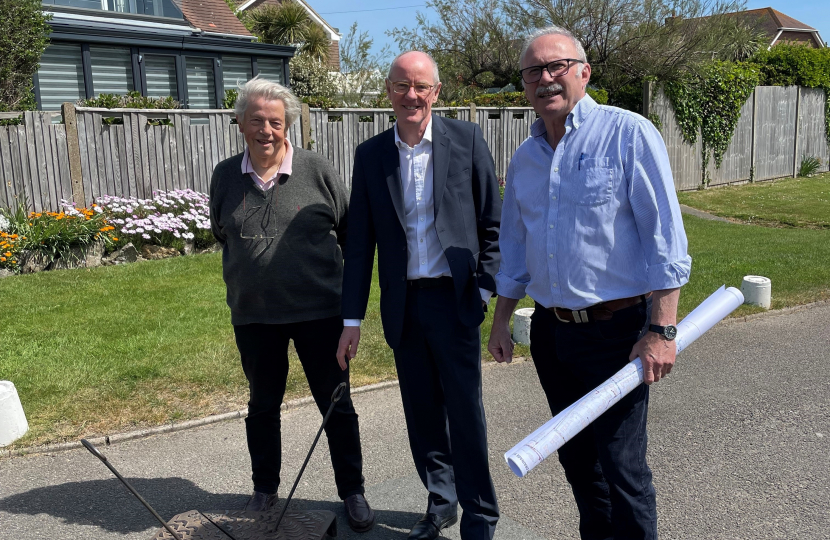 At a recent meeting, Nick Gibb MP discussed the ongoing problem of waste water periodically erupting from a manhole at the eastern end of Limmer Lane in Felpham with senior officers from Arun District Council and West Sussex County Council together with Southern Water. Also at the meeting were local residents John Hall and Neil Chisman. John Hall is also a director of the Summerley Estate Management Company.

This is the latest in a series of regular meetings to find solutions to local storm overflows that are damaging sea water quality as well risking leakages of foul water into the local streets.

Attendees discussed proposals to restrict the infiltration of rain water and ground water into the waste water system, which is one of the principal reasons for the sewerage system overflowing during periods of heavy rain. They also discussed improvements to the surface water drainage system, improved pumping machinery and better pipe connections.

Nick Gibb said: “We are all hugely concerned about the sewerage system being overwhelmed and resulting in leakages into the streets; or storm overflow discharges from the Lydsey Sewerage Plant into the Lydsey Rife. This ultimately then flows into the sea at Felpham. This is totally unacceptable.

“The meetings and site visits I have been arranging over the last few months are designed to find constructive solutions to these problems. On Friday, together with officers from Arun and West Sussex and a senior engineer from Southern Water, we looked in detail at how surface water drains in the area and how the foul water system takes waste water to the treatment plant.

“We need further improvements to the surface water drainage system as well as major investment by Southern Water, upgrading the sewerage system to reflect significant house building in recent years.”

Photo: Neil Chisman, Nick Gibb and John Hall at the eastern end of Limmer Lane examining the manhole into the foul water system.