Pupils from across the country celebrate Mandarin success 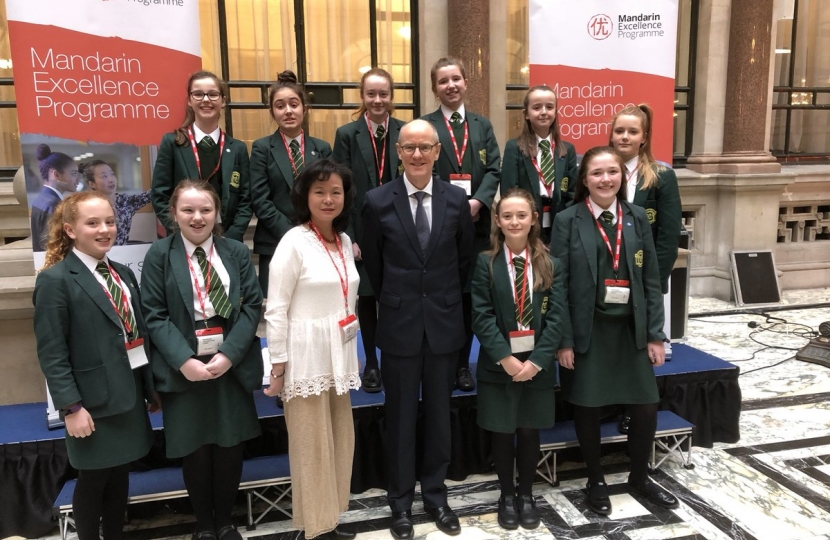 School Standards Minister Nick Gibb has praised the first cohort of pupils on the Mandarin Excellence Programme for their excellent first year results.

The celebration event took place today (Wednesday 6 December) and is part of the China and UK People to People event.

Mandarin Chinese is the most spoken language in the world, and the programme delivered through secondary schools will equip young people with the knowledge and skills to compete in a global jobs market.

The Mandarin Excellence Programme, delivered by the UCL Institute of Education in partnership with the British Council, is on track to have 5,000 young people fluent in Mandarin by 2020 - helping to ensure Britain has the skills fit for the future.

The programme was introduced in September 2016 and the results from the first year show that more than 380 out of 400 pupils achieved over 80 percent in reading, writing, listening and speaking tests, which shows their quick progress and the advanced understanding of the language.

Mandarin Chinese is the most spoken language in the world, so this programme plays a crucial role in helping these pupils achieve the fluency they need to succeed in an increasingly global economy.

The level of fluency in Mandarin achieved by these dedicated pupils after the first year demonstrates the commitment of the pupils and teachers involved in the programme. Young people fluent in Mandarin will be at a significant advantage when competing for jobs with their peers from around the world, and will help us to build a Britain that is fit for the future and ready to compete.

Pupils on the programme spend an average of eight hours per week studying the language, including four hours of classroom taught lessons.

In addition to improving students’ fluency in the language, the UCL Institute of Education, aims to have trained at least 100 new qualified Chinese teachers by the end of the programme.

The pupils who took part in the programme of events at the Foreign Office today had the opportunity to participate in what must surely have been the country’s largest ever Chinese lesson. They met government ministers from both the UK and China and talked enthusiastically about their progress in the language, their enjoyment of lessons and the forthcoming visit to China in July 2018. They all felt this was a great opportunity to see the Foreign Office, to meet pupils from other schools and to realise that they are participating in a prestigious national DfE programme which is considered of significant importance to both the UK and China.

Mandarin Chinese is one of the languages that matters most to the UK’s future – and its importance is only likely to increase as the country repositions itself on the world stage. Not only is learning Mandarin a fascinating process which creates a connection to the rich and varied Chinese culture but is also a language spoken by over a billion people worldwide. If the UK is to remain globally competitive in the years ahead, we need many more young people being given the chance to master Mandarin.

The celebration event, which took place today, was held at the Foreign Office and was attended by over 140 pupils from 14 schools who are part of the scheme. The event formed part of the People to People week to celebrate the cultural, educational and social links with China.

The pupils took part in a number of activities today that were designed to showcase their skills and help them continue their learning. This included a game of Chinese whispers, where the pupils were split into groups and had to communicate a message in Mandarin to help them practise their Mandarin speaking. The pupils were also invited to contribute to scrolls which included the words and characters they had learnt through their time on the programme.

This programme and associated funding is available to state-funded secondary schools with good or outstanding Ofsted ratings.