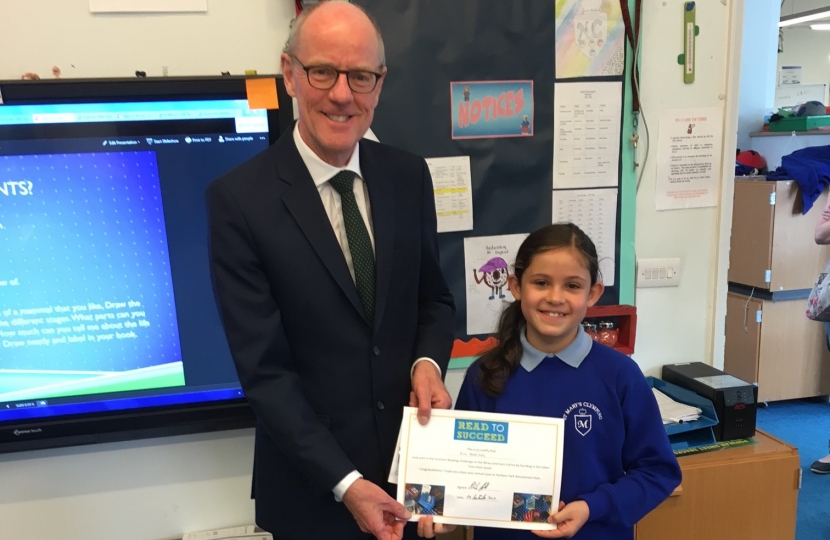 Nick Gibb visited St Mary’s C of E Primary School in Climping to present Eve Hoskison (year 5) with her prize for taking part in the Read to Succeed scheme and the Summer Reading Challenge in the library. The prize is an annual pass to Harbour Park amusement park in Littlehampton, courtesy of Gary Smart.

Before the school holidays, every year 4 child in the constituency was given a free book to take home and keep, to inspire them to read.

Eve is one of many children across the constituency who won a prize generously donated by local businesses including a class at Rose Green Junior School who had the highest participation in the scheme who will be enjoying a trip to the South Downs Planetarium for a special show. Ten children also received a pair of tickets to Goodwood Festival of Speed next year, thanks to the generosity of the Duke of Richmond.

The children were challenged to take tokens enclosed in the book to their local library and take part in the Summer Reading Challenge, entitled Animal Agents. Participation in the Summer Reading Challenge was up seven per cent across West Sussex this year, meaning that more children in Bognor Regis and Littlehampton were reading over the school holidays and went back to school better prepared for the year ahead.

Nick Gibb said: ‘It was a pleasure to present Eve with her prize and to see that so many children in the area have enjoyed reading during the summer holidays this year. Learning to read independently is one of the most important things a child can do to set them up for later life. I am hugely grateful to everyone who has supported and sponsored the scheme, including Harbour Park, Rolls-Royce, Parker PpTek, Barfoots of Botley, Bay Tree Estates, Lord March of Goodwood and the Bognor Regis Lions Club.’

The reading challenge for Year 4 pupils across Bognor Regis and Littlehampton was inspired by Nick’s Parliamentary colleague, Steve Barclay MP, who ran a similar initiative in Cambridgeshire.