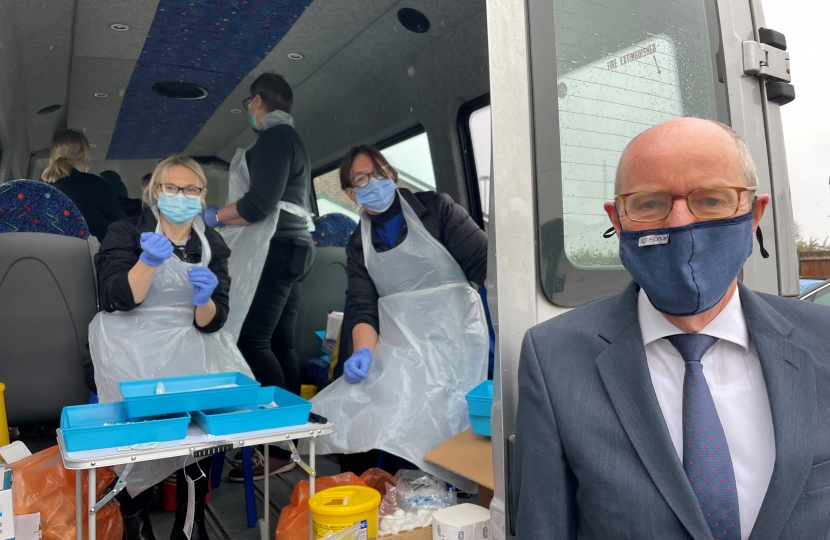 The unit offered the booster vaccinations for eligible adults and first and second jabs for those who have not yet had them. The unit was at the football club for two days - Wednesday (29th) and Thursday (30th). This followed a session at Hotham Park where 156 people received their vaccinations.

The mobile unit operates out of two minibuses, with seven NHS staff, including nurses, a doctor and a number of volunteers. In addition to the mobile unit and the vaccination centre at the Bognor Regis Health Centre, “pop-up” vaccination services have operated at three GP practices: Middleton Medical Centre, Grove House and Maywood.

Nick Gibb said: “As a community we all play our part in helping to tackle this dreadful virus. As the new Omicron variant spreads rapidly throughout the country and the world, we know that the booster vaccine is providing important protection from serious illness.

“It was wonderful to see the mobile vaccination unit operating over the Christmas period. A large number of people braved the weather to ensure they were able to have their booster jabs. Thank you to all at the NHS who’ve done so much to help people receive their vaccination and thank you to the volunteers who helped to guide people through the process.

Photo: Nick Gibb at the mobile vaccination unit at the Bognor Regis Town Football Club with nurses Louise and Dawn in the background administering the vaccines.

I have received a number of emails and letters from constituents concerned about the shortage of NHS dentists in Bognor Regis and Littlehampton.