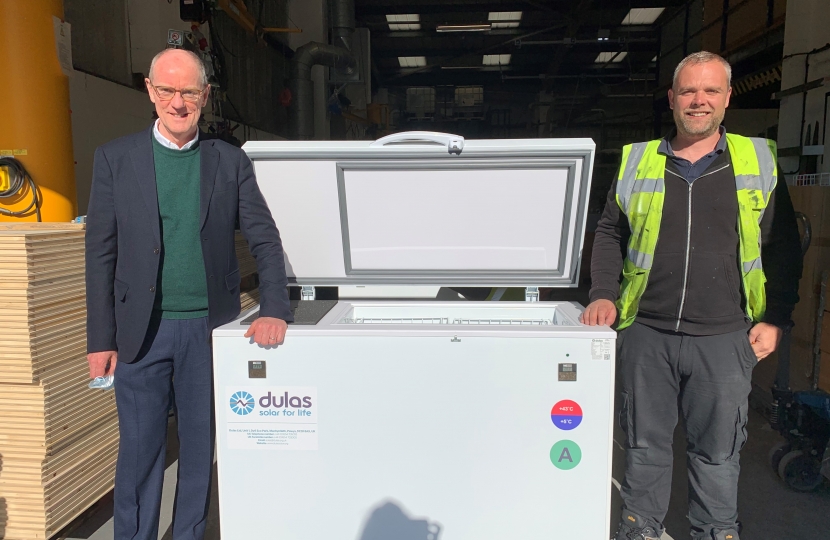 Given the importance of vaccines in helping to tackle the current pandemic, Mr Gibb wanted to see how the Bognor Regis based company was responding.

Polestar is now wholly owned by Dulas Limited, a renewable energy company based in Powys.

Polestar produce about 2000 fridges a year, the vast majority of which are exported to developing countries in Africa, including: Angola, Benin, Ethiopia, Madagascar, Nigeria and Togo. They also export to Yemen, Pakistan and India. Polestar’s main customer is UNICEF which purchases the fridges as part of their mass vaccination programmes, particularly vaccines against measles.

The measles vaccine has to be stored at between 2 and 8 degrees centigrade. The fridges can be used in the most remote parts of Africa, powered by solar panels during the day, with the special lining in the fridge keeping them cool at night when there is no solar power.

The company also produces about 600 medical fridges a year, some of which have been supplied to the Nightingale Hospitals.

Polestar employs about 25 people in Bognor Regis and have been busy throughout the pandemic.

Nick Gibb said, “The world, including the UK, is pouring vast resources into finding a vaccine against the coronavirus, with scientists at Oxford University and AstraZeneca amongst the most advanced. But when the vaccine is ready it will need to be taken to some of the hottest and remotest parts of the world, and refrigeration will be key to storing and transporting those vaccines, which have to be kept at a constant and low temperature to keep the vaccine viable.

“Our own Bognor Regis based company Polestar will be playing a key role in that endeavour as they have with transporting and storing the measles vaccine, working with UNICEF to help eradicate measles. It’s comforting to know that businesses here in Bognor Regis will be playing an important part in helping to inoculate the world against this global pandemic.”