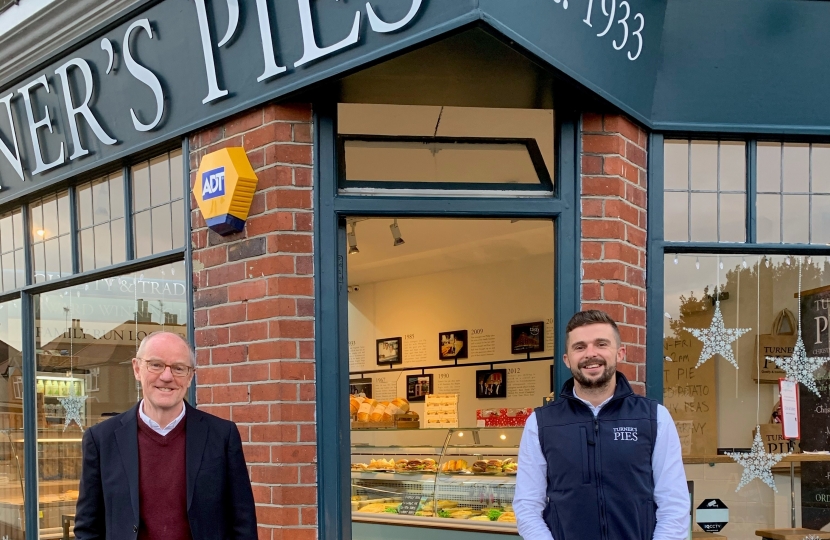 Turner’s is a third generation family company, established in 1933, originally as the Commercial Hotel in Bognor Regis. This was a popular destination hotel where Eva and Reginald Turner (Phil’s grandparents) baked and sold their first pies.

By 1985 Eva and Reginald’s youngest son and his wife Margaret expand the pie baking business, originally from their home, and in 1990 open their first shop; in Hawthorn Road, Bognor Regis. In 2009, Pip and Margaret’s youngest son Philip took over the running of the business and was joined by his two brothers, Joseph and Peter.

In 2012 the baking is moved to a central location in Littlehampton, with fresh overnight deliveries to each of Turner’s now four shops: Bognor Regis, Broadwater, Chichester and Rustington.

The company now employs 35 people and during the pandemic has expanded its ’Pies by Post’ mail order business.

Nick Gibb said: “Just before Small Business Saturday, it is good to have visited one of Bognor Regis’s most successful and well known local businesses.

“Turner’s supplies their high quality pies to retailers around the country as well as to residents of Bognor Regis and the surrounding areas. It is a genuinely family run business, led by the inspiring 34-year-old Phil Turner, grandson of the original Turners who ran the Commercial Hotel in Bognor Regis and developed the first Turner pie recipes.

“I am sure that Turner’s Pies will continue to go from strength to strength in the years ahead. A truly Bognor Regis product with a national reputation.”