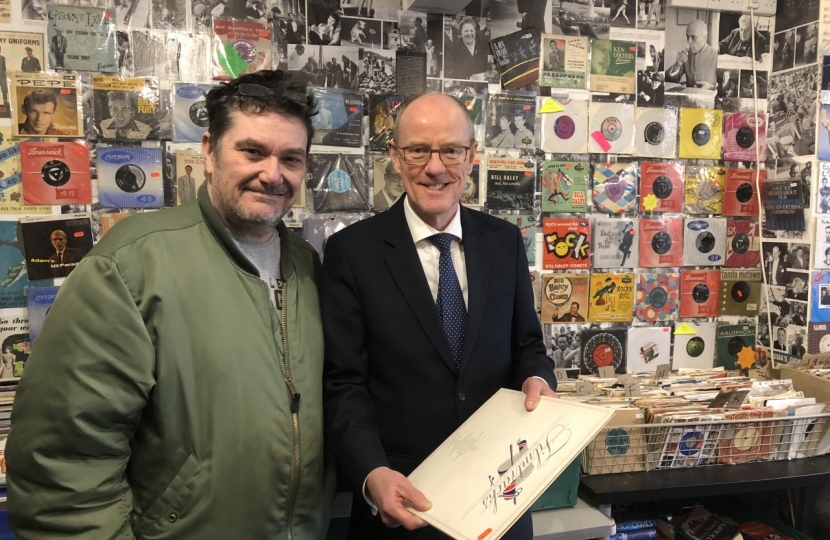 Nick Gibb MP visited the premises of Radio Respect in Argyle Road, Bognor Regis at the invitation of its co-founder, Chris Collins.

Radio Respect was established in 2013 by Chris and Caroline Collins to provide support to people who have been or are tackling mental health issues.

Radio Respect is a Community Interest Company with a small budget from donations and a small income generated from the retro and vinyl record shop they operate.

Currently Radio Respect broadcasts via the internet but they are in the process of applying for a Community FM Broadcast Licence. They operate out of premises in Argyle Road and West Street and have 15 volunteers, including DJ and broadcaster, Doug Everitt.

Nick Gibb said: “Radio Respect is an important local radio station that helps people with mental health issues. The organisation also helps those who are homeless with clothing and bedding and a place to meet.

“Chris and Caroline Collins do a wonderful job providing information and support via the internet to thousands of people who may be tackling mental health issues and I wish these dedicated and selfless people, and the volunteers who help them, continued success with everything they are doing.”

Photo: Chris Collins and Nick Gibb in the retro and vinyl record shop that helps to support Radio Respect.