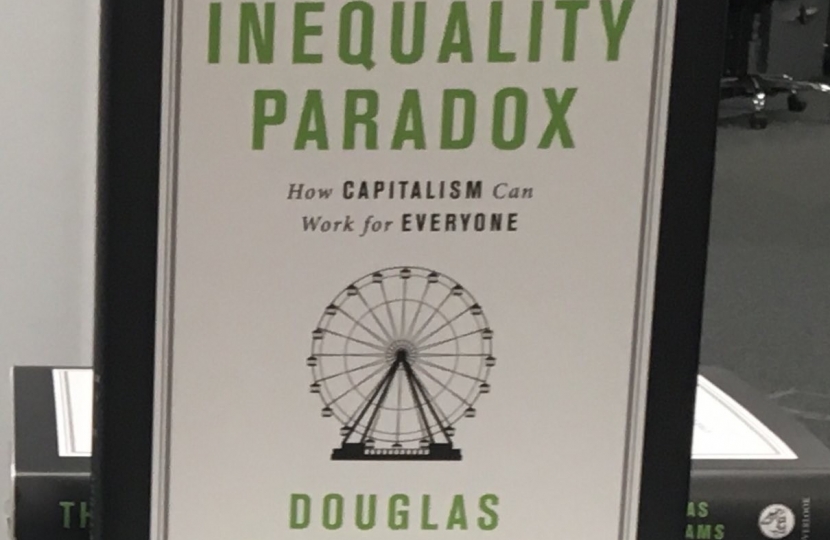 It is a real pleasure to be able to join my friend Doug McWilliams at the launch of his latest book, ‘The Inequality Paradox’. I have known Doug, as Geoffrey Howe might have said, for perhaps too long. But what’s always impressed me is how Douglas is generally several steps ahead of the herd when it comes to his understanding of the economy, both the world economy and the UK’s.

As an undergraduate, he understood before others the important role that the Asian economies would play in the latter part of the twentieth century and the 21st century.

He points out in his book the importance of the so-called developing economies and the fact that in the year 2000 these accounted for just 24% of the world economy but by 2017 that had risen to 46% and is set to rise to 56% by 2032.

Douglas was one of the first to understand the significance of the Tech sector and our dependence on the morning cup of coffee. In his seminal book ‘The Flat White Economy’, inspired by working near the Old Street roundabout, he pointed to the understated importance of the dynamic of the confluence of the tech and the creative sectors that feed off each other in and around east and north London.

And more recently Doug has repeatedly warned the West not to downplay the productivity of the Russian economy – something he also wrote about in his blog from his Peking to Paris car rally last month.

But it’s Douglas McWilliam’s ‘Inequality Paradox’ that I believe is set to have a huge impact on political debate, particularly, but not confined to, Conservative circles.

For Conservatives, the concept of inequality belonged to the left. For us, what mattered was not equality but the creation of wealth. Better that every section of society – particularly the poorest – saw their living standards rise even if the price of this was rising inequality.

The free market and capitalism was and is the most successful economic model for delivering the greatest level of wealth in the most efficient manner.

As I said at the SMF in April:-

“The capitalist system has done more than any other to lift the poorest out of poverty, to open the world up to exploration, to inspire the inventions that have transformed the ways in which we connect and talk, expand our knowledge, broaden our horizons. It’s a system that has helped us treat diseases that were otherwise regarded as death sentences; that has supported the expansion of freedom where previously repression and dictatorship reigned; that is developing technology to help tackle climate change. And let us remember that it is a system that quite simply helps us to fund the lifestyles we want and the public services we rely on. That helps us to lead the good life we want for ourselves and others.”

And Douglas goes on to write that, “This statistical data is backed up by health indicators and life expectancy data.”

What more heart-rending justification for the free market, for capitalism and for globalisation could there be than taking 1.25 billion people out of extreme poverty.

But the Paradox is, as Douglas writes, that

“What is superficially bizarre is that this reduction in global poverty happened mainly at a time when inequality in most Western countries was increasing at its fastest rate”.

“Globalisation” Douglas writes, “seems to have increased inequality within countries while at the same time reducing inequality between countries.”

But why should inequality matter, given the huge benefits to the poor of the world that the causes of that growing inequality have delivered? Isn’t increasing inequality within developed countries a price worth paying if it reduces inequality between countries and massively reduces extreme poverty?

Douglas provides an answer to that question which needs to be understood by every thinker on the centre right. He writes:

“Perhaps the worst problems caused by inequality are those of exclusion and alienation. … Many people at the less privileged end of society have a sense of a society where things are getting worse for people like them and they see their own position in life declining, with little hope for the future for either themselves or their children.”

This will in turn impact on their political outlook, something I also tried to address at the SMF in April. In that speech I referred to the musical Hadestown, recently on at the National Theatre.

“The musical Hadestown is a love story, but it carries a deeply political – and undeniably left-wing – message. It denounces the values of capitalism while venerating the ideals of a socialist society.

“And as I watched it being performed, I became aware of a remarkable phenomenon. …. The theatre was full of what would best be described as middle-class young people. Intelligent professionals. The future of this country. …. The kind of people who cheered Jeremy Corbyn at Glastonbury and gave him their vote two years ago. And they cheered again at Hadestown.”

And this notion was confirmed in a survey in last week’s Economist of a sample of people in the US who were asked whether they had a positive attitude to the word Socialism and to the word Capitalism. For the under-29s, 50% had a positive attitude to Socialism compared to about 35% for the over 65s. And the reverse was true for the word Capitalism – 50% positive for young people versus over 75% positive responses for the over 65s.

So Conservatives need to take the issue of inequality seriously.

I believe, as does Douglas, that one of the key answers to overcoming inequality is education.

“Good education”, he writes, “is probably the single most important way of breaking the cycle of deprivation.”

And Douglas’s optimistic conclusion is one I share, that, “… it is possible to counteract the driving forces that are otherwise likely to increase inequality”.

And that is what has driven our education reforms since 2010.

We have successfully taken on the education establishment and changed the way that reading is taught, pushing our country up the international league tables for reading. We have transformed maths teaching both at primary and secondary, reformed our GCSEs, removed thousands of worthless qualifications that the poorest in society were being duped into taking. Grammar, punctuation and spelling are now being taught as never before and we’re testing to ensure children know their times tables.

There is a great deal more to do. Sometimes I feel as if we’ve only just begun when you consider the fact that in Nottingham, which is the 8th most deprived area in the Indices of Multiple Deprivation, 80% of secondary schools are rated good or outstanding compared to just 50% in prosperous Hertsmere, 243rdmost deprived out of 326 local authority districts in that same index.

Why is it that one state school in east London, Brampton Manor Academy, recently reported that 41 of its students have received offers from Oxford and Cambridge but, although the DfE does not centrally collate information on university offers, looking at the 2017 destination tables, there were no students with an Oxbridge destination from Blaby, Bassetlaw, Braintree, Broxborne, Broadlands (in Norfolk), to name just the local authorities beginning with a B; and none from Chorley, Corby, Castlepoint, – you see where this is going! Overall, there were 45 out of 323 local authority districts with KS5 students without a single student with an Oxford or Cambridge sustained destination.

I’m grateful to Douglas for his copious quote from me in his book, making these kinds of points about the importance of addressing the knowledge gap, the vocabulary gap between children from wealthier and poorer backgrounds.

I believe this is the key to addressing inequality and Douglas’s book will be seminal in making the case that if we are to preserve the confidence in an economic system that does so much to alleviate poverty and create wealth for the majority of people and for our public services, we need to address the issue of inequality in all the ways set out in ‘The Inequality Paradox’ by Douglas McWilliams.